We are Robert Schol and Mariska Schrieken and live in the small village of Zwaagdijk-Oost in the northern part of Holland.

The first dogs that came to live with us were Argentine Dogo’s, in the 1990’s of the last century. It was Christmas Day 1993, when Moreno van Noordwoud, a puppy male, was picked up from his breeder. For a while we also owned a second male, Thor Foch De Luna Del Sur. He came from Argentina and was a very sweet male. However, we didn’t continue our interest in Argentine Dogo’s.

Moreno lived to be only 7,5 years old and has been a very good foster parent to many Tosa-puppies. Although our house is now taken by Tosa´s, our white boy Moreno still is and always will be in our hearts. He was our first dog and we have learned much about dog behaviour from him.

In 1993 we read an article in the Dutch magazine "Dogs With Spirit" about an unknown Japanese breed that attracted our attention. At that time, the Tosa was a very rare and unknown breed in Holland. We purchased our first Tosa female, Morajama Kazai vd Akkelei, in 1994. Unfortunately, she didn’t live to be very old. After her tragic death we made the choice for another female puppy. This was Akira Mitchiko vd Akkelei. She was born in February 1995 and entered our household in April 1995. 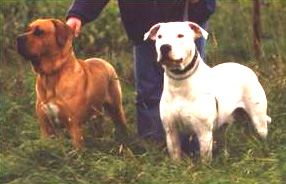 After we tried to the best of our possibilities to get to know the breed better, we decided to take the big step and breed a litter ourselves. We started searching for a male, not an easy task at that time, but we succeeded and found a USA imported male in Hungary. In April 1998, we went to Hungary and Akira was bred to DogStar’s Yamato. Yamato was bred by DogStar Kennels from California, owned by Serena Burnett. He was owned by the Hungarian kennel "Tanakajd Szepe", nowadays famous for their Dogues de Bordeaux.
Our first litter was born in June 1998. From this litter we kept 2 sisters, Gin (Aginjiro) and Tango (Acatenango) and with them the “Megasthenes” story really got off to a serious start.

Our kennelname originates from Greek literature. “Megasthenes” is the name of a traveller and philosopher (about 350 BC – 290 BC) who travelled through a.o. India and published his impressions and experiences in a book; only fragments of this book have survived and are nowadays called the Indika. Megasthenes was the first person from ancient history who wrote about the dogs he encountered on his trips, big and threatening and who must have been the predecessors of our current Molosser breeds. So, we thought it to be appropriate to name our kennel with our Japanese Molosserbreed after this man named Megasthenes. 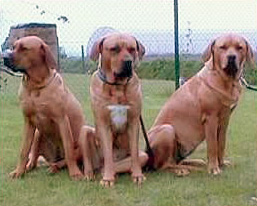 The foundation: Akira Mitchiko vd Akkelei (center) and her daughters Gin (l) and Tango in 1999

Gin and Tango both have been very successful at various dog shows; they probably are the reason, together with their mother Akira, we got hooked to showing. Akira is not alive anymore, she died in 2004, Tango unfortunately died in 2006 and Gin left us at the age of over 11 years. Their legacy lives on in younger generations, amongst them sons and (grand)daughters of both these ladies.

We take great care in raising and educating our puppies and young dogs. Our dogs live inside and out of our house, they are no kennel dogs and are properly socialized at a young age. We don’t have too many dogs as with a smaller number of dogs we can give each individual dog the attention they need, which is very important in our point of view. When our dogs are too old to be bred or participate in dog shows, they live their lives with us till the end. Our dogs are a hobby for us; we only breed 1 litter per year and our females preferably do not produce more than 2 litters in their lifetime. An exception to that rule has occured once but it is not our common practice. 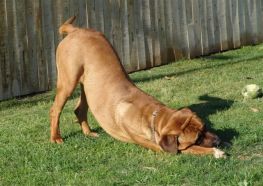 From each litter, usually some puppies are sold abroad; because we practize limited breeding, prospective buyers have to be very patient!

We have sold our puppies all over the world; we are proud to say that in some (foreign) Tosa-kennels the foundation dog has been a "Megasthenes" Tosa. Because of the common interest of Tosa-fanciers all over the world we have made many new lifetime friends over the years.

We work together with other Tosa-breeders, both in Holland and Europe, to establish the future and health of the breed as our common goal.

Our puppies are all sold with an 18 month guarantee, FCI pedigree, a DNA profile and all necessary shots and dewurmings.

Our dogs are officially tested for HD (hip dysplasia) and ED (elbow dysplasia) according to FCI rules.

We would like to inform prospective buyers of our puppies that we do not sell our dogs to the UK, Denmark, Norway, Australia or New Zealand due to the fact that the Tosa is prohibited by law in these countries.