The Tosa is a part of FCI Group II, section Molossoids, the heavier breeds amongst this FCI Group.
In the Netherlands, the Tosa still is being considered a “rare” breed although its numbers are rising slowly.

The Japanese Tosa, or Tosa-Token, is the original “tournament-dog” (used in fighting competitions) of Japan, created by the Japanese at the end of the 19th, beginning of the 20th century at the island Shikoku, in the place Kochi in the Tosa-district. 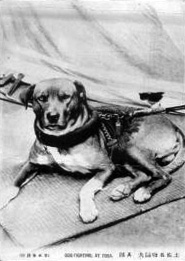 It is determined by old documents that the Tosa is no native Japanese breed, but the result of crossings between “old” Tosa’s (the breed nowadays called Shikoku used to be called Tosa) a spitz-type of breed and several Western breeds. This crossbreeding is also the reason the Tosa cannot be named a “National Monument” in Japan; an honour bestowed upon a.o. the Akita. To be awarded with the title “National Monument” a breed (and its original habitat) should be unique to Japan and the Tosa is not acknowledged (yet) by the national Monument committee.

National Monument breeds are a.o. the Akita, Japanese Chin and the fighting bird Onagadori who could grow a tail of sometimes 10 meters long!

The Tosa was created by breeding the native Japanese dogs who were of the primitive type (wolf/spitz type) and used for hunting, to St. Bernards, Mastiffs, Great Danes, Bloodhounds, English Pointer, Bulldog and Bullterriers.

Dogfighting has a long tradition in Japan, as in many parts of the world back then. Traditional Japanese fighting dogs at that time were of wolf-type, in contradiction to the dogs of Western traders/travellers that entered Japan; these dogs were of the Molossoïd type. Japanese dogowners at this Meji-period saw possibilities to improve their own Shikoku dogs by using the Western dogs of the travellers. Some data of when particular breeds were used were actually recorded and that is why we can with some certainty name these breeds and the respective timeframes they were used to create the Tosa.

Around 1872 an Olde Bulldog, owned by an English teacher from Kochi was used.
The Mastiffs were used in 1874; these dogs were owned by Mr. Matsunaga from Tokyo and Mr. Oohara from the Okayama prefecture.
The Pointer was added about 1876. In 1924 a Great Dane, imported from Germany and owned by Mr. Kyono from southern Akita was also used at the crossbreeding.
Also Saint Bernards and Bull Terriers have been added, but no recorded data of their additions has been documented. In the 1960’s of the 20th century 3 Dogues de Bordeaux were exported to Japan and used but this experiment has been ended immediately.

Of course this only was the start of the creation of the Tosa, by selective breeding of Shikoku’s and Western breeds slowly a breed developed that combined the height and weight of the Western breeds with the courage, loyalty and fighting instinct of the Japanese native breeds. The final result ended up to be a strong and agile large dog with a Mastiff-like appearance.

Even though the Tosa was now pretty uniform in its appearance, the emphasis on the breeding-program still lay at the breeds functional qualities. The Japanese weren’t exactly interested in maintaining a certain type of dog, but over the years the breed has established itself in looks and character. Even today this is not a priority with the Japanese: if the dog can’t perform its original duties they don’t consider it to be a Tosa. 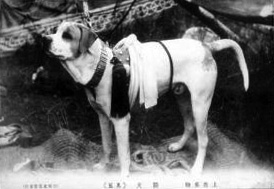 Pictures of Tosa Fighting Dogs from the Taisho period (1912-1925) show dogs with a different look than today’s Tosa’s. There are but a few dogs that show the Mastiff-characteristics that nowadays is seen in the Tosa-breed.

As you will understand the Tosa was developed out of many different breeds with different backgrounds. This explains why even today the type of the Tosa can vary from that of a heavy-build Mastiff-like dog to an elegant and lightweight dog. This variety of types can also be seen in the breed’s native country, Japan.
In the country of origin, Japan, also today tournaments are organised by different associations, mostly located in the Kochi region. Only males are used in the tournaments, females are used for breeding purposes but sometimes put to different tests to see if they possess the necessary spirit to produce capable offspring.
The competition in fighting is often compared to the Sumo wrestling competions held in Japan. Many rules and titles bestowed upon the dogs are indeed comparable to those of the Sumo wrestling.
The Champion of all is crowned with the title “Yokozuna” , the Grand Champion.

Extended details and info about all the different rules, weight classes and various ranks and titles can be found on other websites dedicated to the fighting Tosa’s.

Slowly the time has come to conclude that a “split” in the breed has been inevidable. The Japanese still are looking and breeding for a functional fighting dog in different weightclasses.
In the Western countries and Europe breeders are looking for a true-to-type Tosa, but don’t put an emphasis on the fighting abilities of the breed since in our part of the world dogfighting is an illegal activity. (in our personal opinion any form of fighting animals against oneachother is animal abuse)
The character of the “European” Tosa’s is somewhat different than that of their Asian counterparts, but still, ALL Tosa’s are equipped with a strong character and temperament, not suited for just every dog owner.

The ideal in breeding Tosa’s should be to breed a uniform type of dog: a Tosa doesn’t need to be a copy of the Mastiff but the type of a Ridgeback is also not preffered. The goal lies in between: a large athletic, sometimes a little stretched dog with a large head and some dewlaps and skin. (not too much! The danger of overtype is realistic and doesn’t do justice to the Tosa) The Tosa needs to be an agile and athletic dog at all times.

Instead of putting their Tosa’s into a fightingring, most European breeders and owners seek different jobs for their dogs. Throughout Europe many Tosa’s take part in conformation shows or are worked in different activities: hiking, cycling (next to a bike) tracking, obedience etc.. Tosa’s usually don’t excel in the typical working-breed activities but there are records of Tosa’s that achieved good results in obedience and tracking.

The Tosa is the largest of all Japanese breeds and the only one residing in FCI Group II. The breed is also known as Japanese Mastiff, Japanese Molosser, Tosa-Ken or Tosa-Token. 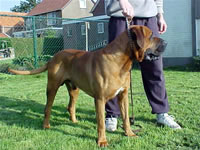 The first impression when one encounters a Tosa is that of a large and athletic build Molossoïd dog with a large head.

The average weight range of a Tosa male ranges between 50 till 75 kgs. (with exceptions up and down the scale). The avarage weight of a female lies in between 40 till 65 kg, with exceptions up and down. The height in the Fci standard speaks of a minimum size: females as from 56 cm. and males from 60 cm. These measurements are indeed a minimum, since probably almost 100% of the Tosa-population will exceed these measures.
The colour ranges from a very light fawn till dark red, black and brindle. Especially in Europe in the 1980’s and 1990’s an increase of the very light coloured fawn dogs was seen. This probably traced back to the fact that many Tosa’s from Eastern Europe were imported. At that time many of these dogs were influenced by other breeds; many showed the likes of a.o. the Ca de Bou and Dogo Mallorquin, to name a few. Luckily nowadays breeders in Europe are focussed again on breeding and buying pure-bred Tosa’s and this development came to a stop.
In Holland and Europe the emphasis in the breeding programs is also put on a good and stabile character of the Tosa. This also means the European Tosa’s stand way far back from their Asian counterparts who are still solely bred to perform. (i.c. fighting).

Something to take note of is that the Tosa males usually are more dominant than the females, especially towards other male dogs.

When purchasing a Tosa one should consider their own experience with large-breed dominant dogs and ask yourself the question whether or not you would be capable of handling a Tosa.
When raising a Tosa from puppy to adulthood, consequence, patience and gentleness in an iron glove are the keywords. A Tosa is a keen learner, an intelligent dog but should be given their own time when learning and teaching. Remember that the Tosa is no working breed like the German Shepherd, Rottweiler, Dobermann etc. Oh yes, they will please their owner but lack the enormous will-to-please that is so typical of the working breeds.
Therefore patience in the learning process is the keyword. There are Tosa’s known that are trained and titled in SchutzHund, Therapy dog and obedience etc. but these are the expections to the rule.
This by no means indicates the Tosa is a dumb and lazy dog; the Tosa is a very intelligent dog but will not see the use in returning the ball thrown for him a dozen times. No, Tosa thinks its enough after 2 or 3 times and then will start some other interesting activity.

As a guard dog, the Tosa is in its element. Without showing extreme agression, the Tosa’s appearance usually is enough to keep unwanted visitors at a distance. Self confident as they are, the Tosa has a natural dominance and presence.

When choosing a puppy, make sure to visit as much breeders and owners as possible and listen to their stories and experiences. Ask questions to the breeder, ask about any health checks, such as Hipdysplasia (which examination is common in Holland) and ask questions about the parents of the puppies.
This will help you determine which would be the right breeder for you to pick your puppy from and lead a long and healthy life with your Tosa.